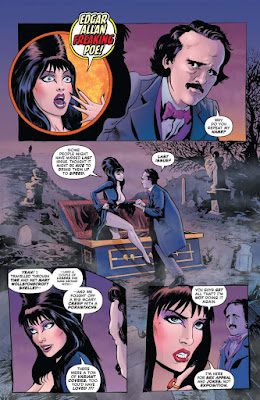 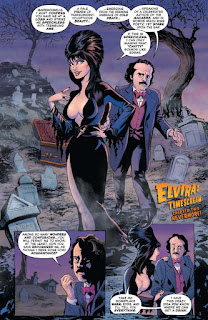 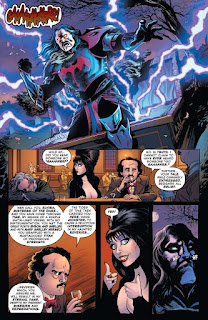 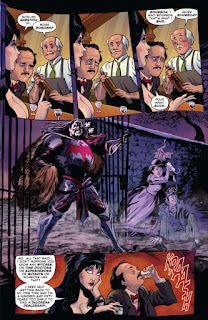 Elvira, the late night host of horror films in the 1980s and 1990s incarnated Cassandra Peterson, returns with her adventures in a comic book format. Elvira is a voluptuous and funny woman who loves the horror genre and the gothic look, her film Elvira Mistress of the Dark of the year 1988 is of cult movie. Its main characteristic it's her acute sense of humor / self-conscious and that frequently breaks the fourth wall. This comic highlight all these qualities.

In the first issue for a mysterious reason, Elvira's bed / coffin receives an enchantment and each time SHE enters it travels through time. In # 1 he traveled to the nineteenth century and met with Mary Shelley the creative writer of Frankenstein. Apparently this story arc will maintain this tendency of encounters with real and important fictitious characters that have contributed to the culture of terror, what a brillian approach.

In this issue Elvira meets Edgar Alan Poe, the legendary writer and horror poet who has influenced generations, right in the same cemetery where Poe wandered at night to get inspiration.

The meeting between Elvira and Poe is fun and ends in a bar where the attack of a very famous visitor in the world of terror reminds the MISTRESS OF THE DARK to find out what is happening, the reason for these trips in the weather. The plot highlights in a respectful and humorous way the possible way of speaking of Edgar Alan Poe, an almost endless verbiage, and highlight his bravery too.

Among all these comedy is also and enjoyable and brilliant terrifying pursuit.

The jokes, references to pop culture (from Chris Hemsworth to the Delorean), the winks to the fourth wall and especially her self-consciousness (she knows she is in a comic book and she lets you know) make Elvira a highly entertaining character

It has no sudden changes in the plot, the story is centered on how Elvira interacts with Poe, there is nothing beyond that, however this does not mean that the comic is boring, quite the opposite, it is really entertaining. The ending tells you what literary celebrity Elvira will visit at # 3.

Written by David Avallone and illustrated by Dave Acosta, who manage to successfully adapt the essence of this fun and crazy star of the darkness, I think is brillian how they show how women react when a man sees Elvira, that wink is perfect.

Each comic is a stanalone story, it is not necessary to read the previous issue.

Elvira is a comic that reminds you how funny is this horror icon, they refresh and bring her to this century, making every transcendent issue due to the terrifying celebrities that appears.