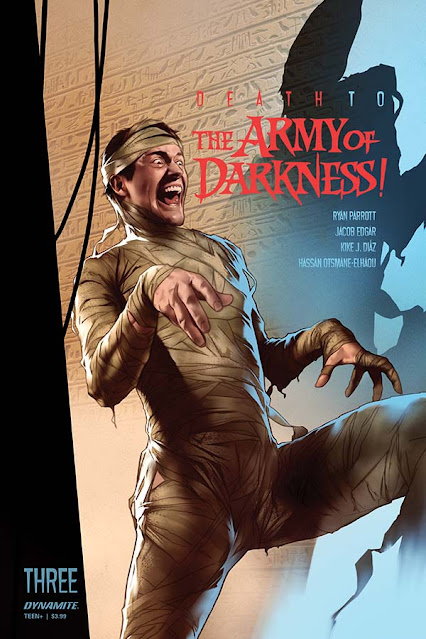 Créditos
Escritores: Ryan Parrot
Ilustrador:  Jacob Edgar
Colorista: Kike J Diaz
Fecha de lanzamiento: 17 de junio
Publicado por: Dynamite Comics @dynamitecomics
REVIEW IN ENGLISH
Ash is an important character in pop culture, as the protagonist of the trilogy of The Evil Dead, crazy horror movies and low-budget comedy (B movies) by director Sam Raimi. This anti-hero was portrayed by Bruce Campbell.
Ash's fame is because in the film his right hand is cut off because he was possessed by a demon and he stuffed a chainsaw and used it as a weapon
What does it come from?
In DOAD # 2 Ash is accompanied by an assault team made up of versions of Ash from parallel universes, an Ashley woman, a Skull and a small version, now accompanied by Dash the dog, who knows how to do the Necromicon spells.
They are all sent by the Necromicon to ancient Egypt.
What's going on?
The Ash-Team confronts a Pharaoh and his subjects, when suddenly one of their scholars transforms into a Deadites, a kind of monster demon sent by the Necromicon to stop them.
This chapter shows more interaction between the characters with good moments of comedy from the small Ash, closing with these adventurers arriving at a mysterious palace hidden in the desert.
Summary
A new obstacle is overcome by the Ash-Team, however they do not yet know the potential of their enemy
RATING
3.9 out of 5
Credits
Writers: Ryan Parrot
Illustrator: Jacob Edgar
Colorist: Kike J Diaz
Release date: June 17
Posted by: Dynamite Comics @dynamitecomics
Fuentes / Sources:
Dynamite Comics
@Dave_DSG
Publicadas por Dave_DSG Un Cómic Más a la/s 11:35 p. m.